If you’ve ever heard of the 10,000 hour rule you’ll know that some people use it as a rough guide for becoming a master or professional at a skill of some sort.

So it would take a golfer 8 years to get in 10,000 hours of practice if you are putting in a decent work load per week.

For golfers putting in more like 40 hour work weeks on their golf game, it would take 250 weeks or 5 years.

For golfers who don’t hit the links often, 10,000 hours of practice will be a lifelong journey.

Do You Really Need 10,000 Practice Hours to Become a Great Golfer?

It really depends. Every person learns at a different pace and has different abilities that compliment their practice.

In my case I had never played golf before. Maybe once or twice. Then at age 16, I decided I wanted to learn golf and started practicing on my own at my grandparent’s golf course. My swing was awful, I would hack the ball 10 yards ahead of me. Sometimes only a few yards ahead of me…

After spending awhile at the range hitting balls, I got the contact part down eventually and could hit 3 out of every 4 balls a decent distance and just 1 would be a hack. They were bad slices though, so I had to work on the straightness next.

As I improved on my own and showed I was serious about playing and getting better, my family bought me a few swing lessons with the course head pro and he helped me work out my slice.

Once I got rid of my slice I could get down to the green in 2 shots on a par 4 but not my short game needed work so I would bogey the hole. I was a bogey golfer just a few months after starting to learn the sport. This is because there is a learning curve that is exponential and then levels off, in a plateauing manner. 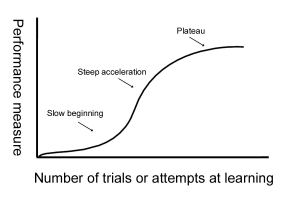 You start off learning something slow. Then it clicks and you have an acceleration period where you get a lot better really quick. Finally, you start to plateau as this is where the great and the professionals are separated.

In my case, I started off slow by hacking and 3 putting and duffing chips. I spent 40-60 hour weeks at the course over the summer and 30-50 hours each week after school and on weekends. This allowed me to quickly get through the slow phase and move on to the accelerated phase.

The accelerated phase would last from spring of my sophomore year until summer of senior year.

I dropped from 60 on 9 holes down to bogey golf 45’s on 9 fairly quick. Then plateaued briefly due to winter and a struggling short game that had lagged behind my swing progression. Then the 2 year acceleration phase began again as I improved my putting and chipping.

My scores dropped below 80 into the high 70’s just a year after starting then slowed again barely dropping the next year from high 70’s to mid 70’s.

Once I extended my putting range out to 6 and 7 feet, my scores were around par. By the end of summer going into college, I had been able to consistently shoot par and a few tournament wins were under par. This all was just 2 and half years later from when I started playing golf.

I clearly hadn’t needed 10,000 hours of practice to get down to par golf. If I had to estimate I probably put in a 40 hour week of practice on average. I can multiply this by 130 weeks which would be a rough estimate of 5,200 hours of practice. I won’t get technical about winters because I still practiced putting and chipping indoors during the 4 months of winter.

After 5,000+ hours I had reached another plateau of not being able to break 70. I was good but not a professional.

Maybe the final 4,800 hours would have gotten me under 70 consistently and allowed me to participate in some web.com tour qualifiers but I was far from PGA status:

Overall, you can get drastically better the first 1,000 hours you put into your golf game. The first 100 will be slow growth and then you’ll accelerate.

It really comes down to how efficient your practices are. It’s not so much how long they are. If you get to the course and put in quality work, you’ll get quality results out of it.

Here’s a quality practice routine you can try out:

You can use sets of 10 to make the reps go quicker and save walking time back and forth to the hole. This will make practice more efficient by cutting out wasted walking time. But don’t just knock ball after ball to get the 50 reps over quickly. Take your time and do your pre-putting routine or pre-chipping routine prior to each rep.

This practice may take 2-4 hours to complete. Record your results and try to beat them each time you go back.

If you want additional practice plans, I’ve created 3 different 12 week programs you can access by joining our online golf academy. Membership is lifetime once you join. Learn more about these golf practice plans here.

Ever wonder what the 15 best golf practice drills are?? Download the Drills!
Holler Box
Go to Top