In this review we will look at the Callaway Epic Irons which are one of two models. Callaway came out with the standard Epic Irons as well as an Epic Pro iron set which is more compact and offers less offset in head design.

The Epic irons are longer in distance than the Epic Pro thanks to slightly longer shaft lengths. But if your goal is precision and accuracy, then the Epic Pro irons are the better choice.

However, most beginners and mid-handicappers will be better suited for the standard Callaway Epic Irons which gives them distance while still offering forgiveness and improved accuracy.

Overall, you can’t go wrong with either and the Epic Iron design is sleek with black and green color scheme to make you feel good about what you’re swinging. Let’s dive into the review 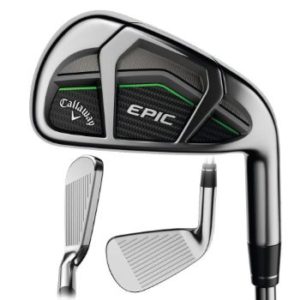 The iron club face is built with assistance from an Exo Cage Chasis which pairs with the Face Cup Technology to allow the face to flex as much as it needs. The Exo Cage stiffens the body of the Epic Irons face to help with ball speed and energy transfer.

Callaway is known for their face cup technology to increase ball speed and the Epic Irons are no different. They include this ball speed technology also.

The ISW technology comes with changes from previous models to better adjust the launch of the irons.

Overall, think of this feature as the aspect that helps with the center of gravity of the irons to help the Epic irons launch the ball high and far.

Design & Look of the Epic Irons

The Epic Irons have a wider sole (part that sits on the ground) and longer hosel which can help with distance. There is also more offset when looking down at the irons at address.

The design isn’t super compact so it still has that cavity back feel when looking at the iron.

The Epic irons are considered mid-compact with performance cavity to help add some forgiveness to shots compared to the blade model irons that are compact with no or less cavity backing.

These Callaway Epic irons will feel lighter in your hands as opposed to other irons sets like the Steelhead XR and Apex models.

This is largely a result of the shaft used in the Epic Irons which is a premium Project X LZ 95 steel shaft.

This golf shaft is built for stability and performance to assist the club to maximize it’s potential throughout the golf swing. There are other shaft options for the Epic Irons but we like the standard stock shaft Project X LZ 95. 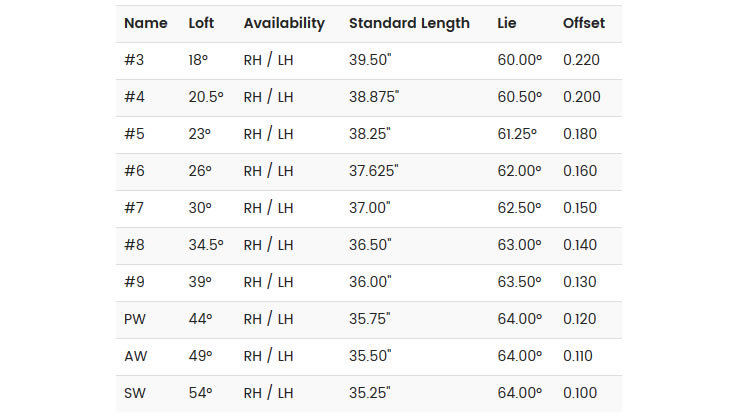 This iron set features a 4 iron through pitching wedge and is priced in the mid $400 to $500 range making it pretty affordable to most golfers. Considering these are a performance iron set that can help your play improved, we feel they are priced well compared to some iron sets that can run over $1,000.

Check the price and reviews of Epic Irons on Amazon