Should You Buy an EVNROLL Putter? (2021 Reviews)

One of the latest crazes in golf equipment is the EVNROLL Putters which are designed to strike the golf ball evenly through the entire putter face to help you see consistency in your putts.

On traditional putters, if you miss hit off the toe or heel, the distance of the putt will be largely effected. You also may notice putts start off-line and continue to slice or draw even further off your intended line.

But with the EVNROLL Putters, the face is designed to reduce the severity of your mishit putts, keeping them straighter.

They claim that EVNROLL putter mishits not only travel the same distance but also end up in the same spot, resulting in more made putts.

Check out this image of what we’re talking about. 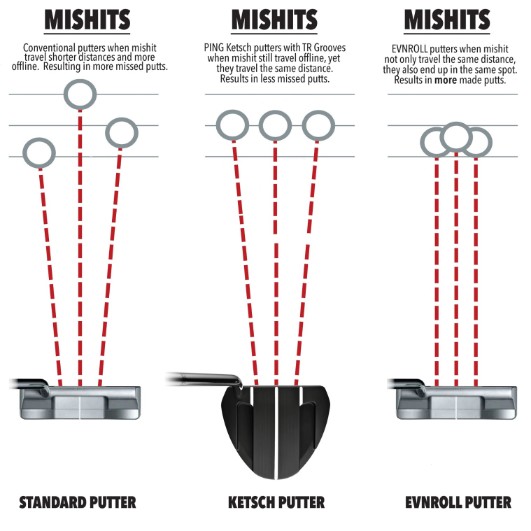 Currently there are 12 different putters you can buy from EVNROLL. Here is a photo of all 12 different makes and models.

Their most recent putter is the EVNROLL ER9. But as mentioned, we love the EVNROLL ER8 just as much as the forum communities who voted it most favorite putter.

Click here to see pricing and reviews of the EVNROLL ER8 mallet putter on Amazon.

How Much Do EVNROLL Putters Cost?

The EVNROLL Putters are on the more expensive side, ranging from $300 to $359 which places them in a comparable pricing category to your Scotty Cameron by Titleist which run $399.

Here is a recent list of pricing for each of the EVNROLL Putters:

You can buy direct from the EVNROLL Website or you can shop for cheaper pricing on Amazon here.

The Technology Behind the EVNROLL Putter

Why do golfers claim that the EVNROLL putter gives them better accuracy compared to all other putter options available for sale?

All EVNROLL putters have the “Sweet Face” Technology that produces an even energy transfer across the hitting area resulting in virtually no dispersion for the golf ball.

Not only are you getting a correction for distance, but their putter face groove technology also corrects for accuracy, which is something other putter manufacturers haven’t been able to correct yet.

Let’s explain how it works.

While closely spaced grooves create a superior roll they also soften the impact. Simply stated, less contact surface means less hit. In tests, a ball hit in the center of a non-grooved putter traveled 25 feet. That same putter with grooves with just a quarter of the contact surface only reached 23.5 feet.

In simple terms, energy is transferred when the golf ball makes contact with the face of the putter. But with grooves on a putter face, this creates separation as part of the golf ball doesn’t touch the face due to the grooves.

Therefore, these grooves can be manipulated by creating different design patterns to impact the golf ball differently depending on which grooves the ball strikes.

On normal putters, every centimeter away from center, the ball loses X percentage of speed due to how most grooves are designed. 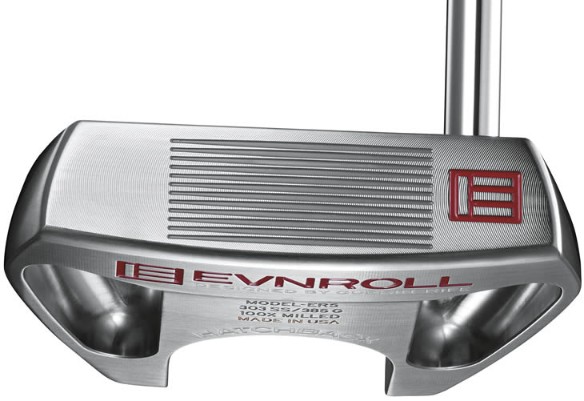 However, EVNROLL has perfected a groove design that causes the golf ball to travel similar distance regardless of where it strikes the face.

You’ll find that on long putts, you have more consistency helping reduce 3 putts which is a factor that impacts many amateur golfers. So I do believe investing in an EVNROLL putter will pay off for helping you score lower!

And another huge factor is the reduction of mishits trailing off line.

Think about a long putt. If you hit the putt off line, it has a long way to travel to the hole and can keep traveling off line, leaving you far from the hole (both left and right) even if you hit it the perfect distance.

For example, on a 15 footer, a ball hit just half an inch off-center will travel about 6” off line and 5% shorter. That slight miss-hit is a missed putt!

This unique milling pattern also gears the ball back to the center helping keep face mishits on line just like center face hits.

Who are the Founders Behind the EVNROLL Putter Concept?

Evnroll was founded by Guerin Rife and Stephen Riley at the PGA show in 2015.

Guerin was in the early stages of testing and developing a technology that has the potential to revolutionize the game of golf… a putter that eliminates miss-hits by broadening the sweet spot to create “The Sweetest Face in Golf.”

Learn more about them here on their website’s Our Story Page.