How to Putt: Beginner’s Putting Tips

“Drive for show, putt for dough,” majority of golfers have heard this age old quote. To seasoned players it will sound redundant but beginner golfers should take this advice to heart. Hitting a 300 yard drive is great, but at the end of the hole when you add up your score that drive counts just as much as a 2 foot putt.

Beginner golfers are often times caught up with hitting the ball, instead of thinking about getting the ball in the hole. When a new player is introduced to the game it is very important for them to learn about the ins and outs of putting, proper putting technique, and how to practice their putting effectively. 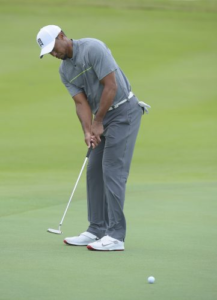 Putting allows a player to find a method that works for them personally. The basic technical principles of putting are very important to learn early on. But once you have the hang of them, you are then able to add your own personal touches onto the putting strokes.

The grip is a good example of personal preference, Jordan Spieth uses his signature left hand low grip, Justin Rose has had a lot of recent success with the claw grip, players like Tiger Woods prefer a more conventional grip.

Jordan Spieth has shown over the last couple of years that making putts can really be a game changer. Over the last 2 seasons Jordan has been one of the best putters from 10 to 20 feet, including his magical 2015 season when he won the Masters and US Open.

All the best players in the world are consistently good at holing putts from 6 feet and in, but from over 10 feet away the task becomes a lot more challenging. On average Jordan makes 2.2 putts over 20 feet per round, this is very significant because making longer putts can really be a momentum builder throughout a round.

For beginner golfers it isn’t necessary to be too caught up in the numbers, for them it is important to spend time practicing short putts (5 feet and in), and to get a good grasp on how to judge speed on longer putts.

A good understanding of basic putting technique is very important in order to build a consistent reliable putting stroke. The main key factors to a good stroke can be summed up as follow:

A good rule of thumb to follow for a consistent putting setup is to have your feet shoulder width apart, with a slight bend in your knees. It is important to setup with your eyes over the ball, thus a slight hinge in the hips are required in order to achieve this.

The main objective is to set up in such a way that your arms hang freely without any tension in your hands. Ball position is another important aspect of the setup, a good setup will be to position the ball either in the middle of your stance, or to have it a touch further up in your stance towards your left foot for right handed players.

Alignment is one of the first basic fundamentals that a player learns when they take up golf. Alignment is extremely important in putting, but most importantly alignment of the body is what really matters.

Even though alignment is a basic concept it is something that golfers need to check on a continuous basis. It is very easy to gradually learn bad habits that can throw your alignment all over the place.

The key components of alignment are your feet, shoulders and clubface. The first step is to ensure that the clubface is aligned to your target, secondly align your feet and shoulders perpendicularly to the target line.

An easy way to check your alignment is to draw a line on the green with a chalk line, choose a short straight putt and draw a chalk line that runs for roughly 5 feet. Once you have the line it is easy to line up your clubface, if you feel uncomfortable with this setup then you will know that something was off.

If you don’t have access to a chalk line simply put a club down on the ground and align the clubface straight down the shaft in order to check the alignment of your clubface.

First let’s take a look at grip pressure, ideally the goal is to grip the putter as light as possible. Decreased grip pressure will ensure that the putting stroke gets powered by the shoulders and not the hands.

Excuse the pun but there is no rule of thumb for the ideal grip pressure, but keeping the following analogy in mind will help you with finding the perfect grip pressure for you individually.

Imagine holding a bird in your hands, you want to hold it tight enough so that it doesn’t fly away, but you also don’t want to hurt it by holding on too tight.

This explains putting grip pressure perfectly, you have to hold on tight enough in order to be able to control the putter, but you don’t want to “hurt” your stroke by holding on too tight.

Now let’s look at what it means to maintain a soft right side. Majority of golfers use a putting grip that is similar to their normal grip, thus the right hand will be below the left hand for right handed players.

Naturally, due to the configuration of your hands, the right shoulder should be lower than the left shoulder. Some players tend to think that they need to compensate for this imbalance, that isn’t the case at all, having a “soft” right side is very important, especially with putting.

If the right shoulder and arm are in a tense position it will prevent a smooth shoulder turn, thus having a “soft” right side will lead to a more rhythmic shoulder turn and putting stroke.

The Importance of Putting Speed Control

Before looking at different putting drills it is important to take a moment to discuss putting speed.

100% of putts that are short of the hole don’t go in, this is a fact that can’t be argued. It doesn’t matter how perfect your line is, if the ball doesn’t get to the hole it cannot go in. The same rule applies to putts that are hit too hard, if the ball carries too much speed it will be physically impossible for it to go in.

Amateur golfers spend too much time trying to figure out what line to hit a putt on instead of focusing on the speed of the putt. Instead of trying to decide whether a putt is going to break either 3 or 4 inches, rather focus on what speed you need to hit the putt with.

In reality both of those line are correct, it just depends on the speed that the ball is going to be entering the hole with. Beginner golfers often times struggle with perfecting their strokes, at first focus mainly on speed putting, this will ensure huge improvement in your putting right out of the gate.

Short Putt Drill – 3 and 6 Footers Around the World

Most weekend golfers are very quick to give a 3 or 4 foot putt to their buddies saying “It’s good man, pick it up.”

Deep down they are doing it with the hopes that the favor will be returned because secretly they are petrified of those short putts. Sound right? Be honest lol.

This is one way to deal with the problem, but in reality the plan has no longevity at all. When you play in your annual club tournament then you will have to putt out those short putts.

The 3 and 6 footers around the world putting drill is a great drill that will help you get confidence on those short putts.

Continuously moving on to a new tee is important because this way you don’t get use to hitting the same putt over and over. Once you have mastered this try and get 12 in a row, and once that doesn’t challenge you anymore move on to 6 feet.

Read: How to Make More Putts Inside 10 Feet

Many amateur golfers blame missing short putts when they have a couple of 3 putts per round, but most of the time distance control on longer putts is the problem.

It is important to take a close look at your putting game as a whole in order to blame the correct area for your putting woes. The 2 putt speed drill is a great putting drill that will help you eliminate those dreaded 3 putts.

This drill help with more than just your speed, it will also challenge your mental game. When you have made about 8 two putts you will start to feel some pressure in order to continue the streak to 10. At first if 10 in a row is too difficult, start with 5 in a row and then gradually move up from there to 10.

Putting is an extremely important part of golf, and the sooner that a beginner golfer can get a good grasp of it the better. In order to get a consistent putting stroke a good understanding of basic putting technique is vital.

Understanding the correct putting technique is one thing, but the only way to improve is through practice. Instead of pounding hundreds of golf balls on the range practice your putting for at least 30 minutes instead.

For many beginners, putting is their downfall.  Be smart and make putting a focus where you spend most of your practice time to get ahead of the game right from the get go.