If you’re thinking about buying a new set of golf irons and looking for the best irons available, we’ve got a separate review for that! But today we will highlight one of the top golf iron sets that easily makes everyone’s “best of” review lists including ours.

If you’re familiar with the TaylorMade irons, they’ve created a P760 and P790 series that are geared more towards professionals and better golfers.

On the other hand the M-Series Irons by TaylorMade are geared more towards Mid-Handicappers and High-Handicappers, making them perfect for beginners looking to buy the best irons available for their skill level.

The M4 Irons by TaylorMade are very impressive with the new design look, feel, sound, and RibCor technology that helps them add speed, distance, and forgiveness to the list of features to look forward to.

Below we will compare the M4 irons against their old M2 counterpart as well as the M3 irons which launched at the same time as the M4 irons, but have slight difference in design and purpose.

The TaylorMade M4 Irons have replaced their previous model, the M2 irons. The biggest difference is the Speed Pocket on the M4 which is now longer and has a slimmer curved line instead of the former dumbbell shape on the M2.

The Speed Pockets job is to increase the speed of low center strikes to help you maximize distance on this mishits. This is one reason the M2 was renowned for it’s forgiveness and the M4 iron will continue this tradition for TaylorMade.

As far as Face Design, the M4 irons still have face slots on the 4 iron through 8 iron to increase ball speed on your off center hits.

Additionally, TaylorMade has upgraded the M4 and M3 irons to include RibCor technology which are bars they inserted behind the face slots in the heel and toe to stiffen the upper portion of the iron’s head.

RibCor has helped the irons reduce the loss of energy, resulting in higher ball speeds and longer distances making these TaylorMade irons one of the best on the market for distance just like their M2 counterpart.

RibCor also positions more mass in the heel and toe of the irons which increases the MOI and reduces the twisting at impact to help shots fly straighter.

If you’re someone who thrives off the sound of the iron as it makes contact with the ball, then the M4 irons are sure to impress.

The sound and feel is better than the M2 2017 irons thanks to the larger carbon badge that wraps around the irons. It works in conjunction with the RibCor technology to help reduce vibrations so the clubs feel and sound better at impact.

Overall, you’ll find an increase in launch and forgiveness in the new M4 irons while these irons also continue to impress as distance irons to help you hit the ball far.

M4 Irons vs M3 Irons: Which is Better?

The biggest difference golfers will notice is the M4 irons have a larger face and stronger lofts which helps them create more ball speed with less spin, resulting in better carry distances compared to the M3 irons.

The M4 irons appear thicker than the M3 irons so it’s up to you if you like the look of thicker irons or prefer the thinner M3 design.

As far as forgiveness, the M4’s do produce more forgiveness from there progressive head length and larger offset which increases as you go up the set.

Another difference is the club shaft. The M4 irons come standard with a KBS Max 85 steel shaft which is light and stable, helping you generate as much club head speed as possible.

Overall, you’ll find the M4 irons great if you want faster, more forgiving, and better sounding irons which we’re guessing you do! So check out the features below to get a better since of the differences between the M3 and M4 irons. 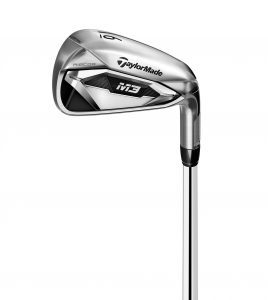 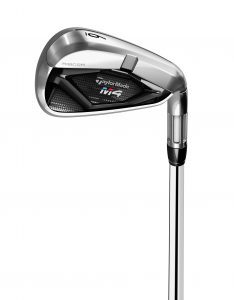 
Should You Buy the M3 Irons or the M4 Irons?

Overall, you can’t really go wrong if you choose either the M3 irons or the M4 irons. They’ve both improved greatly compared to the former 2017 versions of the M1 and M3 iron sets.

The biggest difference between the M3/M4 Irons and the previous M1/M2 models the new RibCOR technology. With the goal of longer, higher and straighter shots in mind, the RibCOR channels energy to a localized point.

In essence, it stiffens the outside of the clubface to increase the face flexibility, which increases ball speed and promotes more accurate shots.

Another bonus of the RibCOR technology is it softens the vibration at impact which improves the sound and feel.

Speed Pocket Technology transfers more energy to the bottom of the club where many players mishit their iron shots, making them more forgiving so you still maximize your distances on your iron shots.