Nike released the first set of original Pro Combo Irons in 2010. This set came with incredible feel and performance setting them aside from other irons of their caliber.

The new set, which is the Nike Pro VR Combo iron, resembles their predecessor in looks, feel, and performance. But of course, being new improved irons, many players are asking about the difference.

In the new VR Combo designs, Nike has eliminated the traditional blade-design featured in the short irons and instead, added the new shot-making gel in the pocket cavity behind 3 to 6 iron’s face.

The design is ideal for tour players as well as low handicap amateurs. Let’s dive into the review. 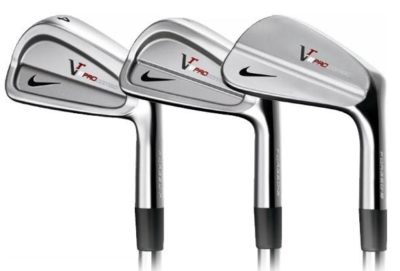 The simple rivetless backs in chrome give it a refreshing look. It comes with a minimal offset with the hosel blending nicely into the leading edge. The top lines start thicker in the 3 iron and get thinner as you progress through the PW.

Despite the shot iron’s cavity, you will still get an incredible feel and workability. It gives a soft, almost numb feel with a welcome sensation.

You’ll get a soft, crisp impact on purely struck shots. You will still get adequate feedback on off-center hits with limited shock or sting. The split cavities and the pocket cavities felt exactly the same.

The polymer that feels the cavity of the long irons gave it the same feel as the short irons hence giving the same solid, forged feel.

There are so many things featured in these irons that make them give a one of a kind performance.

First, the cavity was added as a replacement of the muscle back design of the previous versions. According to Nike, this improvement is put in place to increase the distance gapping and offer a slightly higher ball flight.

Each iron in this set come with a higher head with around 5 grams making the set irons more forgiving than before.

RESOURCE: Join our How to Break 80 Golf Practice Plan

This is the key technology that Nike has added in their 6-iron allowing them to take their position in the long-iron category hence enjoy, a higher trajectory, more speed, and forgiveness.

The shorter irons, 7 through pitching wedges come with a split cavity that ensures a penetrating precision ball flight for players who are more target oriented with every shot.

The polymer, which is also referred to as the shot-making gel, is added into the pocket of the long irons.

This results in a pure sound and feels at impact which almost resembles the traditional blade or the split cavity. This also gives the long irons more forgiveness, increased ball speed for a higher trajectory.

Another factor that contributes to the good performance is the stock shaft, the True Temper Dynamic Gold DG Pro. This helps boost the trajectory of the long irons and still maintain control of the short irons.

Check out these practice resources below as they will take you to that next level and help lower your golf scores if you follow them!