A Review of the TaylorMade M3 Driver

Twist Face Technology is the talk of the new M3 Driver by TaylorMade. It’s creating what’s known as the gear affect on the golf ball by imparting opposite spin on off center hits. This helps the golf ball travel straighter as the opposite spin tries to counter balance against the spin put on the ball from the swing.

Why did TaylorMade decide to create twist face technology?

TaylorMade has observed that the face is often hit by golfers either high in the toe or low in the heel if the middle is not hit. While the company’s realisation and investigation of the golfer’s stance for the past four years is not earth-shattering, the alteration of the face curve is.

The Twist Face design created by TaylorMade alters the curve of the face in areas that enhance the gear effect. The result is a straighter ball. While the curved design of the face is hardly noticeable in real time, looking at it from the downside of the club’s crown gives you an idea of the innovative style.

Hitting the ball high in the toe usually ends up with reduced spin and closed face. Not so with the Twist Face as it opens up to increase spins and add loft, resulting in reduced distance loss and a straighter ball flight.

Heel shots give an opposite effect with the Twist Face. Spins are enhanced while the launch is reduced with the heel area’s closed section. Improved performance in every heel shot becomes a reality. 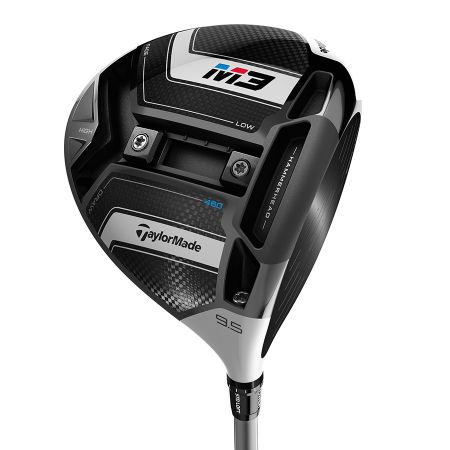 To be fair, the leading edge of the M3 driver may look like any driver which needs further checking out by the user. Yet, the silver-coloured and slimmer design on the crown gives a different but better look to the M3 than the previous M1 2017 driver.

While it’s not the first time TaylorMade has designed a silver driver, remembering the SLDR driver that last used the silver colour on the crown gives you bonus points.

Thinner and lighter than the previous designs, the 5 layers of carbon components provides the contrast and alignment with the black carbon crown and face.

Using the Project X Hzdrus Yellow that has been fitted into the M1 driver instead of the standard Mitsubishi Tensei shaft on the M3 enabled me to give a fair comparison on GC2 heads.

The usually adjustable hosel of TaylorMade allows you to change the shafts and loft by +/-2 degrees. Other than the enhanced design, the solid and lower pitched sound is a whole lot better.

The 9.5 degrees head of the M3 driver can be adjusted a notch higher up to 10.5 degrees compared to the M1 model. Carrying it is longer by 6 yards, launch is down a degree, 260rpm spin, and 4mph for ball speed.

However, the Twist face lessened the effect of my off-centre hits as shown with the 10 yards offline number right up to almost straight on average. This effect was also seen in the dispersion pattern as well.

The Hammerhead Slot could be the reason for the ball speed increase. This is the first time TaylorMade used this slot on their high-end adjustable driver if you exclude the SLDR track pseudo slot.

There is more flexibility in the central Speed Pocket with hardiness provided by the three-sectioned ribs. This allows a 22% longer or 100mm Hammerhead slot than what was used for previous slot models of M2.

You also have access to two adjustable weights of 11g arranged in the Y-Track to fine tune the M3 driver.

The Y-Track is now a single flat track design replacing the previous double track model. Changes have also happened to the one weight front and back of the straight “stock” position.

There is a more distance carry of one yard when you move both weights. However, this gives a little more spin and a lower flight.

I was working with a TaylorMade fitter that recommended dropping the spin a bit to increase the ball speed. This can be made possible by changing the head loft to 9.5 degrees.

It was further recommended that the Y-Track should have one weight added to the front and back draw position. This way a draw bias can be created with the added launch.

Doing all this gave a faster ball speed and a bit higher flight even with the same spin and launch. This also led to the longest total distance and carry.

However, the experienced poor shot made me realize that the fade setting was not for me. The extra spin made the ball go further right and the extra spin robbed me of distance. But then you know how it will go if you draw the ball!

The settings’ final results that were all within the expected reality making us see that being rewarded with the best game depends on the several combinations of weight positions, head loft, hosel loft, and shaft type.

Tightening a position on the Y-Track weights might be one of the issues. However, getting the best possible combinations can be an almost impossible task.

The M3 Head has an available smaller 440c in 9 and 10-degree models if you want to further reduce spins.

Yet, the final result is undeniable for I gained longer best shots, straighter and longer off-centre strikes than the previous M1 model.

The M3 and Twist Face story ends happily for drivers aiming for greater ball speeds and maintaining the speeds across the driver face on mishits. The M3 driver is more forgiving than previous drives and works great for beginners.

Head designs have come a long way with the horizontal MOI of 5000. This is higher than the standard designs of today and which were only seen in models of square drivers.

The adjustable and longer swing of the M3 gave more than the TaylorMade M4 driver model. This allowed my swing of 100mph+ to get me the launch conditions as well as dropping the spin to go a longer distance.

The high-end price of the M3 over the M4 might be a determinant when making the choice. However, paying the steep price is worth it if the gain more than compensates.

It is worth comparing the M3 if you happen to have an M1. The M3 may see a marked improvement in your worst shots. Your partners are also saved the effort of having to look away if you have a pronounced fade or like a bit of spray.

Before you go check out these practice plans to follow with proven drills and routines to improve your short game and golf swing.