The M6 Irons from TaylorMade are built for distance and you won’t be disappointed in overall performance either. They also sound better than the previous M4 irons. Below we will get into a detailed review of the M6 irons.

For starters, the manufacturer, TaylorMade, is famous for producing some of the best game improvement irons. You can feel confident buying from a quality company if you haven’t tried TaylorMade irons before!

The M6 irons feature a cavity back which is forgiving for the average golfer. It also features a speed pocket slit in the 4 iron through 7 iron to help you get distance on these longer irons.

Construction and Design of the M6 Golf Iron by TaylorMade

Here is a photo to understand the following descriptions and features found in the TaylorMade M6 golf irons.

The Speed Pocket slot is actually a Thru Slot on the M6 irons which is what was first seen in TaylorMade’s P790 Irons.

With a Thru Slot speed pocket, the M6 irons have variable face thickness and reduces the weight located forward in the sole.

As a result, the slot is smaller but features a bigger effect since the face of the M6 is more free floating in design. The variable thickness is connected only to the top line body to create more hinge like a fairway wood face.

The top line gets connected to the back of the club thanks to the Speed Bridge. This bridge piece also helps stiffen the face of the club, and reduces vibration frequencies from impact to create a better sounding iron. 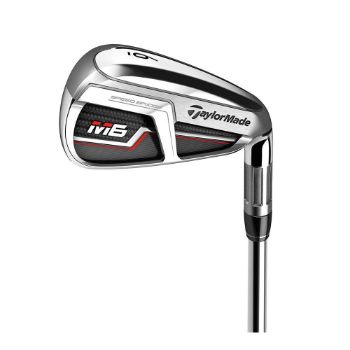 The head size of the clubs is also very generous. This makes the M6 irons ideal for beginners as well as advanced players and the cavity backs are forgiving.

The shorter irons do not feature a speed pocket. They are instead designed for control and accuracy so you can dial in your 20 to 130 yard shots.

For the shorter irons, the trailing edge is tucked away but as you approach the 6 iron in the bag it starts to show more at address. This also is when the club starts to get more hollow sounding as well with the 4, 5, and 6 irons.

One other design feature to note is the vertical face slots that ran up the face of the M4 iron on the outsides of the horizontal face slits.

These are no longer on the face of the M6 irons. Originally designed to add speed on the M4 irons, TaylorMade found that the speed gains were cancelled out by other design factors in the backing of the M6 irons so they removed them altogether.

Read: How the TaylorMade GAPR Fills the Gap in Irons/Woods

The 4 iron loft starts at 19.5 degrees so this compliments your golf bag if you have a 3 wood that is 15 degrees and a hybrid that is 17 degrees to cover some distance gaps between your driver and 4 iron.

The wedge loft is 45 degrees which might be an adjustment for you.

You’ll have to get used to coming down a club or two at different distances since these irons have lower lofts than you may be used to, thus more distance than your used to seeing with each iron number.

Overall, the TaylorMade M6 Irons are a solid set, great sounding, great feeling, and perform with distance you’ll enjoy thanks to the speed bridge and speed slots.