In today’s review guide, we will outline the RocketBladez Irons by TaylorMade which are a great addition to your golf bag if you’re looking to buy new or used irons this season!

TaylorMade has done it all when it comes to their golf club designs. They were the first to break the tradition by bringing out an all white driver head, they came up with funky new names for their clubs and most importantly they have sold a lot of golf clubs over the years.

One of their most successful lines of clubs was the Rocketballz (RBZ). The drivers and fairway woods featured a funky name, a white design that stood out and every golfer that hit an RBZ club, instantly hit the ball 10+ yards further.

The RBZ range didn’t stop at drivers and fairway woods, an initial RBZ set of irons was released and future releases within the RBZ range included the RocketBladez irons in 2012.

The RBZ range is known for added distance through the use of SpeedPocket technology. The RocketBladez was one of the first set of irons to feature this revolutionary technology.

The RocketBladez irons are hard to find for sale these days but they continue to be one of the longest sets of irons out there. Let’s take a closer look at why these irons have stood the test of time.

What You’ll Love About the RocketBladez Golf Irons 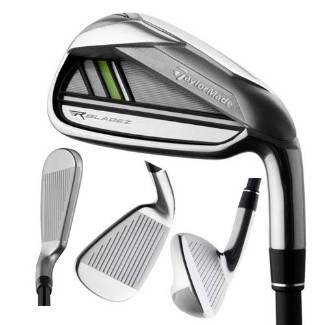 The TaylorMade RocketBladez are a very sleek looking set of irons that will be appealing to a variety of different golfers ranging from the traditionalist to the high handicapper.

The RocketBladez are game improvement irons but their soles are slightly narrower than your regular game improvement iron giving it a more clean cut look. The graphics on the clubhead are very subtle which adds to the classic look and feel of these otherwise modern irons.

The RocketBladez features cast iron clubheads, but don’t be alarmed they offer exceptionally good feel. Those players that are die hard forged clubhead fans will be pleasantly surprised by the great feel off of the clubface at impact from the RocketBladez.

The RocketBladez clubheads feature a satin finish that looks very sleek and clean, the sole at the bottom of the clubhead sports a more chrome like finish.

These TaylorMade irons are hot off of the clubface, but the design of these irons feature a slightly bigger club face area where all hot spots have been eliminated. The elimination of these hot spots ensures consistent distance and control on all irons shots.

The RocketBladez irons feature TaylorMade’s Speed Pocket technology, which was first rolled out in the RBZ series or drivers and fairway woods.

The Speed Pocket doesn’t refer to a hollow hole in your clubhead, so don’t be alarmed nothing is going to get stuck inside the Speed Pocket. The Speed Pocket is filled with specially formulated polyurethane that is developed by 3M.

Other manufacturers have implemented similar technology to the Speed Pocket, but TaylorMade were able to make the technology work.

With the help of the Speed Pocket players are able to increase ball speeds and launch. Higher ball speeds ensure added distance, and higher launch ensures control on the greens with soft landing iron shots.

Added distance and height is especially important for high handicappers when it comes to their long irons. 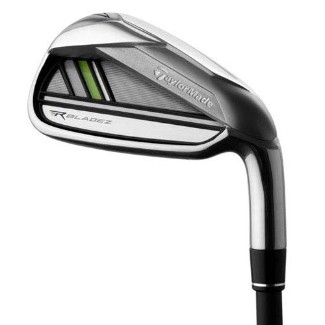 The clubhead of the RocketBladez features an Inverted Cone design, this design feature doesn’t only just allow for a slightly bigger club face area, it also ensures the elimination of hot spots.

Cast iron clubheads are very tricky to bend, one wrong move when trying to adjust the loft or lie and can cause the clubhead to break.

The RocketBladez feature a small notch at the bottom of the hosel, this notch makes bending the club a bit easier and safer. With that being said it is still not recommended to change the standard loft and lie angles of a cast iron clubhead.

How Much Do TaylorMade RocketBladez Cost?

Getting your hands on a new set of RocketBladez might be tricky since they are more than half a decade old, but used sets will be available at very reasonable prices.

Used sets will sell for around $200 depending on the condition and the shafts that are in the irons.

In comparison to the retail prices of current sets it will definitely be a bargain buy if you can find a well kept set of RocketBladez for under $300.

The RocketBladez irons are without a doubt still one of the best game improvement irons. Yes it has been 6+ years since their release but the results they deliver are still up to par with the new selection of clubs that are currently available on the market.

The Speed Pocket technology that is featured in the RocketBladez is timeless and it will continue to promote added distance and higher launch.

The RocketBladez feature a modern yet traditional look, it isn’t as bulky as some of the game improvement irons that are out there. In addition to look good they also feel great as well. The RocketBladez are cast iron clubs but they feel more like a forged iron off of the clubface.

If you are looking for a set of irons that is sure to improve your iron play at a reasonable price then look no further than a set of RocketBladez.