TaylorMade has shown a lot of consistency when it comes to producing golf equipment, and 2021 has seen them make a name in the irons market with their new SIM Max Irons series. With the new series, TaylorMade had assured golfers that they no longer have to choose between distance and feel.

The SIM Max Irons have come to replace the M-Range, which has dominated the market for quite some time now.

The SIM Max and SIM Max OS promise a lot from the manufacturer’s perspective. But do they stand up to the claim? We must put them to the test to see what they have to offer in a real game situation.

What TaylorMade SIM Max Irons have to Offer

The word SIM, which is the short form of ‘Speed in Motion,’ is built upon the Speed Bridge Technology associated with the previous irons such as the TaylorMade M5 and M6.

The irons create a forged-like feel and sound, which comes as a result of its precise design and incredible enhancements.

The SIM Max Irons are perfect for golfers looking for an all-round performance and are ideal for mid handicappers. The game improvement irons promise faster ball speeds, high launch, and forgiveness. 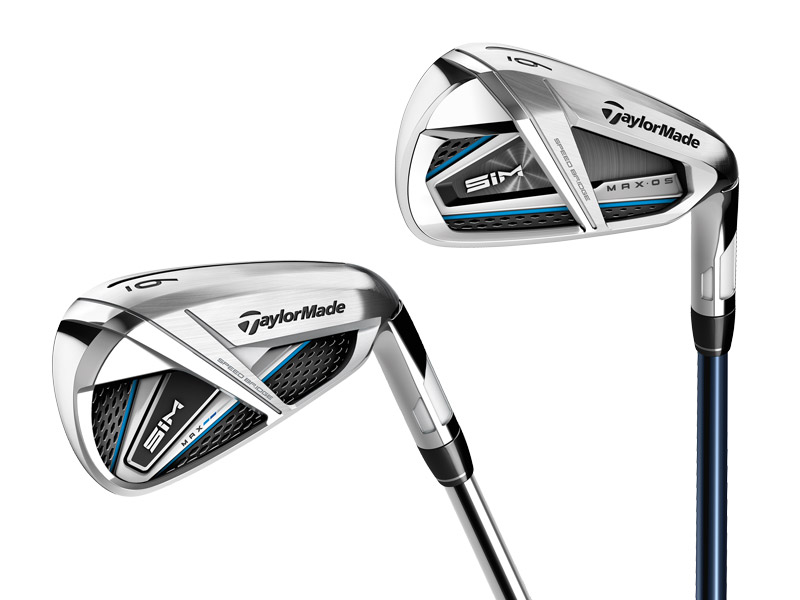 Looking at the bar from top to bottom, the Speed Bridge is prominent enough. The cavity back promises improved stability to the face with a supporting topline. This makeup, together with the Thru-Slot Speed Pocket, gets rid of unwanted vibrations resulting in a better feel and extra ball speed.

The makeup is essential for separating the leading edge from the iron’s sole and creating a free-floating and flexible face. Everything narrows down to improved ball speed and additional forgiveness on all strikes made lower in the face.

This year has also seen additional technologies with the SIM Max irons coming with an ECHO Damping System in the head from heel to toe.

The new system is put in place to help dampen the noise that the previous clubs had felt at impact. The head is all wrapped up with channels allowing the damper to compress, creating a sound similar to that of forged irons.

The irons have an ultra-thin 1.5mm face providing the much-needed flexibility. The SIM and forged irons have no difference in feel and sound.

Another impressive feature incorporated into these irons is the Inverted Cone Technology positioned in different places in the SIM irons.

The technology is perfect for increasing the sweet spot and helping on mis-hits. They have also moved the ICT towards the toe to bring out a draw shape in the SIM.

To be sure whether the Irons work as described by TaylorMade, we took them down to the course. The test aimed to see whether the sound and feel had any noticeable differences compared to what was witnessed in the 2019 irons. We also noted the ball speed and the distance to see if there was any substantial improvement.

The first thing that will strike your eyes when you take these irons out of the bag is their soft blue, grey and black color. The color matches nicely with the drivers and soft on the eyes. You’ll also notice that the irons come with thinner topline.

You’ll be impressed at these drivers as you won’t see their back cavity at address even with long irons. This design added to the whole concept of game-improvement that comes with the feel and sound of a forged iron.

Since most manufacturers are beginning to take note of the importance of sound, it looks like the ECHO Damping technology used in the SIM Max irons is gaining more popularity.

The technology has given the irons a sound and feel of a professional club. This is opposed to the cracking, high pitched sound that came with the M5 irons.

The irons are easy to shape and come with an incredible soft feel but still maintain the speed, launch, and distance.

According to the testing results, the ball speed or the irons fall slightly lower than that of M5. The speed was a little higher while the launch angle came out the same between the two irons.

From these, we can conclude that SIM Max irons are nice irons but mostly perform in courses with high levels of forgiveness.

TaylorMade invested most of their efforts in improving the sound and feel of the SIM Max irons, and they achieved it from the look of things.

However, the ball speed remained the same as the M5 despite them investing in the Speed Pocket technology and thinner face. Max OS has a better look than the M5 and M6 irons for those who care about the look.