TaylorMade is renowned for their driver and fairway wood designs. They have been the #1 driver on professional tours for many years and that trend is likely to continue for many years to come.

Don’t be fooled into thinking that all they produce is drivers, TaylorMade also manufacture some of the best irons that money can buy.

Over the past decade they have released a number of high quality iron sets, one of their most popular releases was the SpeedBlade Golf Irons.

The SpeedBlade irons are still a hot commodity and with the rather expensive price tag of their new recently released irons it is certainly worth it to save your budget by giving a set like the SpeedBlade a chance before buying the latest and supposedly greatest thing on the market.

Let’s take a closer look at the timeless SpeedBlade irons in order to learn why they remain crowd favorites after more than half a decade since they were first released back in 2013.

Review of the SpeedBlade Golf Irons by TaylorMade 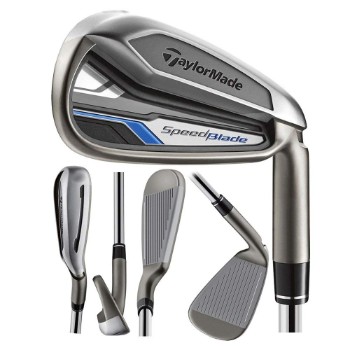 The SpeedBlade irons do sport a rather bulky look due to the fact that they are a cavity back cast iron set of irons. Cast iron is a very hard material and it cannot be bent with ease.

Lie and loft on a cast iron head doesn’t really fluctuate or change over time and adjusting any of those factors aren’t recommended.

The long irons in a set of SpeedBlades features a thicker topline in order to promote confidence over the ball especially under high-pressure situations. The short iron and wedges feature a slimmer topline that resembles that of a player’s iron.

Cast iron clubheads tend to feel firm and hard at impact, but this isn’t the case when hitting a SpeedBlade iron.

The key technology featured in the SpeedBlade irons is the use of Taylormade’s signature Speed Pocket technology. TaylorMade came up with the design of the Speed Pocket after doing extensive research on where amateur golfers strike the ball on the clubface.

Their research indicated that 70% of shots hit by recreational golfers with a handicap between a 5 and a 25 are struck below the center of the clubface. Low off center strikes typically results in low launching shots that travel inconsistent distances.

The long irons (3 – 7) feature a handlebar shaped slot (Speed Pocket) in the sole of the clubhead which allows for he clubface to flex at impact. The result of the clubface flexing at impact is an increase in ball speed and higher launch.

The Speed Pocket that is utilized in the SpeedBlade irons has been lengthened by 3mm in comparison to its use in previous iron models such as the RocketBladez.

In addition to a lengthened speed pocket, the clubhead of the Speed Blade irons also feature several through slots that are located inside the pocket. The addition of these through slots ensures even more flex at impact, which also adds to improved clubhead speed and launch numbers.

A standard SpeedBlade set includes a 4 iron through to a gap wedge, but a 3 iron as well as an S and L wedge can be purchased separately to fill up your set of Speed Blade irons. The Speed Blade wedges feature a traditional design that resembles that of a tour proven wedge.

TaylorMade utilized their technology to perfection when they designed the SpeedBlade irons. The long irons that deliver added distance and higher launch is the perfect continuation from fairway wood or hybrid to long irons.

The slimmer looking short irons and tour shaped wedges resemble the look that any good player of tour pro would go for. Short irons and wedges, better known as your scoring clubs, deliver more consistent results if they promote a more penetrating ball flight that is easy to shape in both directions. TaylorMade hit the nail on the head with these irons and the SpeedBlades have stood the test of time.

The SpeedBlade irons were released in the US on the 1st of October 2013. These irons have been around for a while, but the success they have had and the demand for the irons is testimony that it is one of the best sets of irons that TaylorMade has manufactured in a long time.

How Much Do SpeedBlade Irons Cost?

The SpeedBlade irons have been on the market for more than 5 years thus finding a new set will be a challenge, used SpeedBlade sets are available for roughly $200 per set, the final asking price will depend on the condition of the clubs. The latest TaylorMade irons retail for roughly a $1000 thus getting a used set of SpeedBlades is definitely a budget friendly option.

Check the current price of these TaylorMade Irons on Amazon

TaylorMade have released a variety of golf clubs and iron sets since the release of the SpeedBlade irons back in 2013.

The reality is that the SpeedBlades are half a decade old, but they still remain one of the best iron options available on the market if you are seeking added distance to your long irons and control and accuracy with your short irons.

The SpeedBlade irons are available with shaft options for men’s, women’s and senior players and they are recommended to higher handicap golfers. Don’t overlook these timeless stalwarts when you are in the market for new irons, they might just be the change that your golf game needs.