In this review guide we will highlight 5 of the best milled putters for golfers to putt with. But before we get into the review of each putter, let’s first share with you the science and benefits behind a milled putter. Because you’re probably wondering why should you buy a milled putter?

Well…it has to do with the effect it has on the roll of the golf ball.

To the naked eye, once the golfer strikes a putt, the golf ball is instantaneously in motion, rolling in the direction of the hole. Right?

However, slow motion videos indicate that once the ball is struck, it first goes airborne, lands, skids, and then begins its roll to its eventual destination. Pretty crazy.

Going into the air and then skidding within those first 20 inches after putt impact has the potential of draining the speed of the ball, as well as increasing the risk of it veering off the desired direction. The longer the ball stays airborne, the more speed and direction it loses.

New technologically advanced putter heads and putter faces have been designed, with features that are capable of reducing the amount of time a golf ball spends airborne or skidding after the initial impact.

Milling is one of the main manufacturing processes involved in creating putters that can limit the amount of amount of time the ball spends in the air, or skidding.

Why Putts Should Rotate Sooner

You want the golf ball to begin its end over end rotation as soon as possible after putting in order for it to attain maximum speed, and to move in the intended direction. This will guarantee you much better distance control results and keep more putts on line.

The reason for this is well explained using the theory of Conservation of Angular Momentum. This theory states that when an object such as a golf ball is in motion, the momentum generated will keep it moving unless an outside force intervenes.

When the ball is in the air or skidding, there is no momentum. It only gains momentum when it finally hits the ground and starts rolling.

Hence, in order for it to have maximum momentum, it needs to be on the ground within the shortest time possible after being putt.

In order to provide the most angular momentum to golf balls, most golf putter manufacturers are using the process of milling during the manufacturing process.

What does Milling involve?

When it comes to designing heads and faces of putters through milling, there are actually two processes being inferred.

The first process, which is also the most popular one, refers to the milling of just the putter face. The main aim of milling just the face of the putter is to create a completely flat surface as well as distinct, etched patterns that can help minimize sound on impact as well as a more gentle feel.

The second process involves milling the entire head of the putter, and not just its face. When designing a putter head using this process, the manufacturer takes a homogeneous block of metal, usually steel, and begins removing the excess metal through an automated milling machine until all that is left is the head of the putter.

Milled putters have grown in popularity for a number of reasons.

There is also the fact that milled putters get the ball rolling much faster giving the ball momentum and direction. Your game will definitely improve as a result. You can find both mallet putters and blade putters with milled putter face designs.

Most golfers also prefer milled putters to the alternatives available owing to the look and feel of the putter.

A flatter face and a softer feel of the putter are highly valued by golfers across the professional spectrum. Putters that have been milled have a higher aesthetic appeal in comparison to those that have not been milled.

There is also a certain level of prestige attached to using milled putters, and many avid golfers view these golfing instruments as actual works of art. Take Scotty Cameron putters for example.

Certain brands also carry with them social capital, which is also important for social golfers.

The insert will have a different color to the rest of the putter, and it is designed this way to heighten the golfer’s focus, as well as to help position the ball appropriately before putting.

There is also a cost difference between the two types of putters. Typically, the milled putters are usually more expensive than the insert putters, and other putters in the market.

This is mainly because of the fact that the milling process, despite it being computerized, is more labor intensive and time consuming owing to the design phase of the process.

The Best Milled Putters in the Market

There are a variety of milled putters in the market sold by a large number of different brands. The competition is stiff mainly because of how popular milled putters are among golfers of all calibers.

The best ones that are currently running the market include: 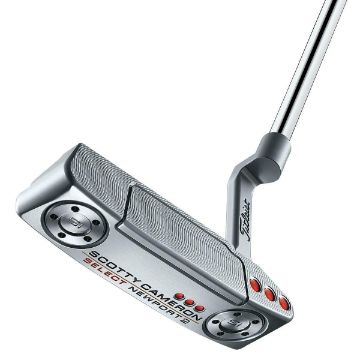 Scotty Cameron putters are definitely one of the most popular putters in the golfing world. The Newport has undergone numerous changes over the years, with the most recent change to this particular putter being effected in 2018 with the release of the Select line of Newport putters.

The Select Newport milled putter currently features 30% more material designed to diminish the strength and the sound of vibrations whenever you putt for that softer feel upon impact that every golfer is looking for.

You will also receive more feedback from your putter as a result to help you adjust your putts, and this instrument will also be more receptive to even your slightest movements.

The blade design of this putter has also undergone some serious modifications to help enhance the golfer’s performance in every round.

The head of the putter is milled from a block of 303 stainless steel metal.

Expect to find perfect sole balancing guaranteeing that the putter is aligned correctly, and sits more squarely than was the case with previous versions.

The Evnroll groove technology is considered among the best in the world of milled putters owing to its efficiency in administering adequate momentum in every putt.

Like all the other Evnroll putters, the ER5 Hatchback not only guarantees you maximum momentum, but also, in the event of a mishit, you are assured that the ball would still go the same distance that it would have had the hit been a center-face one.

In addition, still in the case of a mishit, the ball will still stay on course, towing the line you had initially designed the putt to take.

The head of this putter has been milled from a block of 303 stainless steel. The putter also features a winged mallet design, perfect for golfers looking for that extra precision and control when putting.

Ping’s 2.0 Vault collection is a significant improvement of the company’s first line of milled putters, the Vault.

One of the biggest enhancements in this new collection and that can be found on the face of the Dale Anser is the True Roll (TR) Grooves. These grooves are as a result of high precision milling technology that offers full face cover which is critical for those off-centre putts.

When purchasing the Dale Anser, you can request for customized head weights for the putter depending on your putter head weight preferences.

For aesthetic appeal, Ping offers its customers three distinct finish choices on all of its putters including the Dale Anser. These finish choices include Stealth, Platinum, and  Copper.

Bettinardi has been in the milled putter industry since the 90s, making this brand instantly recognizable amongst avid golfers.

Many golfers swear by the mallet style of putters, and that is exactly what the Bettinardi BB56 offers golfers.

Such putters have large heads similar to actual mallets in appearance. The mallet heads come in a variety of shapes including half moon, or semi-circular.

If you are looking for a putter with significantly more forgiveness than other putters, then the BB56 is definitely the putter for you.

Furthermore, this milled putter is designed from a combination of an  Aluminium 6061 block and 303 stainless steel metal , with one of its main inherent characteristics being that it possesses a significantly high moment of inertia.

The black finish and the polished metal enhance the visual appeal of the putter, giving you a classic, stylish look even as you enhance your putting skills. The putter also features a deeply etched Lamkin cord for that perfect grip even on hot or wet conditions.

Bettinardi prides itself in undertaking all the manufacturing of its putters done in the United States. 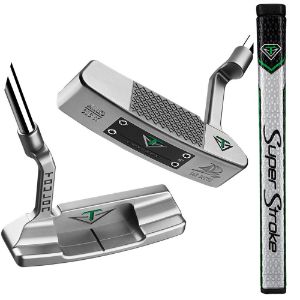 Odyssey is considered the market leader when it comes to the manufacture and sale of inset putters.

Recently, however, the company ventured into the milled putter industry in order to increase its market share, and stop the putter market domination by Scotty Cameron.

The company entered the milled putter market with the introduction of its Odyssey Toulon line of milled putters that are quickly becoming some of the most preferred putters amongst golfers.

The Toulon San Diego model is by far the most popular putter in this collection with its Anser style blade that comes with an extra soft feel. This soft feel is attributed to the fact that the blade has been milled from a block of 303 stainless steel.

The company asserts that the horizontal grooves engraved on the face of the putter are designed to improve the roll of the ball. This guarantees that the ball spends less time in the air, and begins to roll within the shortest time possible after you putt.

This putter’s removable sole plate is another excellent feature that allows the golfer to vary the putter head’s weight to match the golfer’s preferences.

Final Verdict – Should You Buy a Milled Putter?

The putters described above can help you to significantly improve your game and improve the cost effectiveness of your golf tools.

The same cannot be said about golf drivers, which are not as effective as these milled putters in improving your game, are superbly more expensive than the putters, and can only be used a couple of times before having to be discarded.

In fact, it has been shown that putters can last up to three times longer than the golf drivers. Hence, choosing a putter, especially one of these described above will be highly beneficial not only to your game, but to your pocket as well.