This new look came with no bling and had eliminated the red which was present in its predecessor. It comes in black color with a touch of blue with a chrome finish which is cleaner and simpler than the D300.

At a glance, you’ll find the D7 irons looking sleek, sexy, and simpler than its predecessor. Wilson says the D7 irons will do a great job to mid and high handicap golfers. 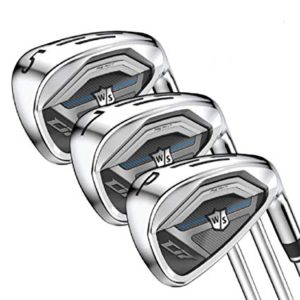 Compared with the Callaway Rogue X iron set, D7 is the strongest in the market down at 28°. The D7 carry distance on average is 187 yards as opposed to 171 yards on average with D300.

It has stronger lofts, firmer shafts, and higher peak height than the D300. The longer irons of D7 give a combination of higher trajectory, ball speed, and lower spin.

The D7 irons give a lively feel, with a loud sound and will give you that feeling of stability.

The hosel on these irons has been modified to 0.20″ longer than D300, and this offers great adjustability. The hosel of D7 irons is longer by 5mm, which makes the head balance more.

It is easier to adjust the lie because of the notch in the hosel which cast clubs need.

You can choose any shaft type of your desire. There is also the steel option – premium lightweight KBS Tour 80 and graphite option UST- Mamiya 460 Recoil series.

The longer D7 golf irons offer golfers increased distances where it is most needed while the shorter ones give precision.

The clubface is ultra-thin and is made with the RE-AKT technology, which produces maximum distances as a result of increased ball speeds. The shorter clubs offer more distance control.

The weighting has improved on the D7 irons. This has been enabled by removing the urethane-filled power holes on the top line and pushing them to the heel and toe.

Thanks to this, there is now an increase of 10% of MOI as compared to the preceding distance irons.

The short irons have fewer power holes. The longer ones come with more power holes which assist in adding the speeds of the balls as they allow more flex on the face of the club.

On the 4-7 irons, there are three rows of power holes, the 8 and 9 irons have two, and the pitching wedge has one and none for SW.

The power holes were a turn-off in the address of C300 and D300. This has been looked into, and Wilson has done a great job to improve it in their new D7 irons.

The D7 irons come with very competitive prices in the market. The graphite shafts will be more expensive than the steel shafts.

The combination of aesthetic nature and technology of these D irons gives value for money, so I don’t think the price will be something debatable.

I’ve you’ve been playing with D300 irons, and you won’t mind a little upgrade, the D7 irons are the perfect option.

This is because Wilson has combined technology used in D300 and other irons to improve on their latest irons in terms of performance, distance, look, and feel.

The irons combine both distance and forgiveness to ensure players get more workability. If you haven’t tried this collection, then you don’t know what you’re missing.